Last Tuesday, my father was put into hospice care and the medical staff evaluating him said that he had maybe a couple more days, possibly more like hours. This was not a shock – indeed, I dare say the news was something of a relief. He was 82, had lived a full life, and was experiencing such a diverse portfolio of unsolvable medical challenges that a return to a life he would find tolerable was essentially unattainable even in the extremely unlikely event that his multiple failing organs could be coaxed into functionality. Then a couple days passed. Then another. And things didn’t seem to really be changing much even though he wasn’t really waking up and was no longer receiving any food or fluids. We planned a small family memorial to occur over the weekend while my brother was still there (having flown in from Germany for the week), but that became a family meal as you can’t really have a memorial then the person being memorialized is still there (item 28b in the rulebook).

One thing that this did was provide me with the impetus to contemplate the notion of persistence.

Among the visitors were his granddaughter and 16 month old great-granddaughter. At one point she was playing with some toys in the hospital room and trying to make them do something. In the blur of it all I don’t remember exactly what it was, but I do remember that the toy simply wasn’t doing what she was trying to make it do, yet she kept on trying and trying. My sister made an observation about how some say that this (doing the same thing over and over while expecting different outcomes) is the definition of insanity, to which I retorted that it could also just be persistence. I wasn’t meaning to be philosophical at that moment – really I was just making conversation to break up the monotony of days of sitting vigil. Yet that moment, juxtaposed against the backdrop of my father stubbornly hanging in there in the adjacent bed, got me thinking.

Indeed, he died on Monday, so I can’t ask him, but frankly I don’t know what was keeping him going for those six days. Was it devotion to his family? Unfinished business? Reluctance to meet his maker? Simply that he was a big guy and it took that long for him to deplete his inner reserves? He had cheated the reaper on numerous occasions before, whether falling off roofs (twice – once in his capacity as an architect, once working at home) or being flung from the window of his VW bus in a collision (whereupon said vehicle flew into the air and LANDED ON HIM) or various less “glamorous” but grim moments of acute heart issues in his elder years. So not unlike Keith Richards (the last remaining person to make me question whether mortality is indeed a universally valid phenomenon) it started to look like he had simply decided not to go.

Because he was a strong-willed person in other facets of life, all of this just seemed to be of a piece. And though I am in some ways rather unlike my father, that sense of stubborn persistence stands above all other traits (from my convoluted sentence structures to my fondness for hot cereal) as the most lasting behavioral inheritance I’ve taken. Nowhere is this more evident than in my dealings with Ehlers-Danlos Syndrome. When people ask me about my soldiering on with music in spite of the physical obstacles, my first response is usually to simply acknowledge that I myself am a stubborn bastard. There’s more to it than that, of course, but in essence all of my strategies and adaptations spring forth from a basic sense of “no, I’m going to keep doing this.”

As with the dialogue about my grand-niece in the hospital room, the question does emerge of how to distinguish the admirable sort of persistence from the delusional and self-defeating sort. This is a tough one because there is often a very fine line and to a large extent it depends on how important outcomes are to you when you assess. That is, we celebrate those who are persistent and eventually succeed, but do we equally admire those who are similarly persistent and don’t ever get “there?” At best, we can make those evaluations eventually, but most likely only with significant hindsight. So what about when we are in the moment and actually making decisions? The uncertainty and subjectivity of all this also means opportunity – specifically the opportunity to define for ourselves what the parameters are. If I make the responsible decision that persistence is necessary, appropriate and consistent with my values and priorities, then who can argue against that?

I was 18 the first time I was consciously faced with that conundrum due to EDS. I have written before about my first semester of college and the difficult realization that my body was breaking down before my eyes. The best I could get in terms of guidance was a well-intentioned platitude here and semi-sympathetic shrug there. Any statements of “hang in there, buckaroo, you can do this” were going to have to come from within.

And then I thought “well, maybe this is a sign.” It’s certainly common to think this when things go a certain way. I hit traffic on the way to the store and then by the time I got there it was closed . . . that must be a sign that I really shouldn’t be buying the trunk-load of Beanie Babies I went there for. And then I went to the supermarket and they were out of green peppers . . . that must be a sign that I should be making something other than chili tonight. So was this set of physical obstacles a sign?

In that moment, I decided that a) yes, it likely WAS a sign, but b) there’s no reliable way I could know of WHAT it was a sign. Maybe it was a sign from the universe that my music career was doomed and that I should pack it in before it was too late . . . or maybe it was a sign that the universe was testing me and that I needed to prove to it, to myself and to the music that I was sufficiently committed. I decided then that I was going to choose the symbolism and that it would be the latter.

One litmus test I have used with myself ever since is asking “what if it doesn’t work?” If I project the answer to be “well DANG, that sure was a waste of time and energy” then it’s reasonable to call into question the sanity of persisting. On the other hand, if the response is “I will be able to sleep at night knowing that I gave it what I had,” then how could I do anything BUT persist?

The ensuing 22 years have given me no shortage of opportunities to reaffirm and recalibrate this perception, and as I have discussed extensively in past writings, persistence for me involves a great deal of adaptation as well. I have been hard at work my whole adult life to figure out the most intelligent, physically sensible ways to proceed.

Neither does persistence mean pig-headed avoidance of the questioning. I woke up this morning with aching hands and had the thought that I’ve had literally thousands of times: is it worth pushing through this? Today the answer, once again, was yes. Some days the answer is “I don’t know,” and on those days I step back a bit and assess whether this is a blip on the radar or a real paradigm shift. If I don’t know, I give it time.

At the core of it all, though, is the persistence itself. It has been truly amazing to me to find this as a common thread among those in the EDS community who I have gotten to know. Each of us deals with different obstacles and each of us has different things we are trying to maintain, against the odds. There are lots of ways to adapt, to change expectations, to access resources and to find solace, but much of it boils down to the seemingly simple question of whether to fight or whether to roll over. Rather often, rolling over looks on paper to be the most sensible conclusion, but most of the people we celebrate in human history are those who persisted against the odds and in some way came out on top. I am certainly not encouraging anyone to stick their heads in a lion’s mouth in the name of defying the odds, but when our basic human dignity is at stake, a certain degree of stubborn defiance is healthy.

At this point my father is at rest and presumably adjusting to whatever his next realm of being may be. I will never really know the reasons behind his last burst of persistence, but it was a fitting end and an apt demonstration for all of us who are hesitant to take the limitations we see at face value. Thanks for giving us all one more lesson, Dad. 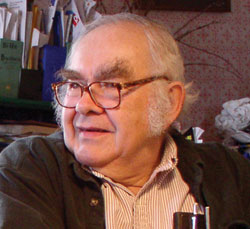 Love Is A Constant Struggle

I Want You to Know