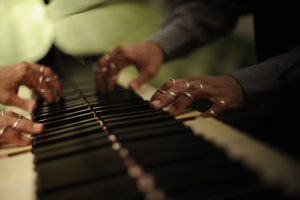 This picture here shows my splinted hands, an image now inexorably tied to my visual presence in the world and the most common point of conversational entry allowing me to tell people about Ehlers-Danlos Syndrome. I even wear my splints sometimes when I don’t technically need to, partly because these conversations are important and partly to challenge the last inner vestiges of resistance against showing that vulnerable but important aspect of myself to the world.

A friend suggested that this year, for my 10th (!) installment in my annual series for Ehlers-Danlos Syndrome Awareness Month, I talk about visibility, and that got me thinking about the inner journey that brought me to that point. This photo is from ten years ago, which was five years after I began wearing the splints, which was two years after I decided to make a record (“Patch Kit”) about my life with EDS, which was maybe 3 years after I was so demoralized that I basically threw in the towel . . . but we’ll get to all of that in sequence.

I’m one of the lucky few with EDS who managed a diagnosis at a young age, but spent my formative years not knowing anyone else with the condition and thus walking through the world plagued by something I didn’t entirely understand, that I knew others (including most doctors, never mind ordinary folks) didn’t understand at all, and that in my mind did nothing but make me an outcast unable to live up to society’s expectations or even my own.

So to whatever extent I could hide it, I did. Easier said than done as a child when my face was riddled with scars, my knees and shins were perpetually purple top-to-bottom, and if I was wearing long pants it was still hard to miss the knee pads bulging forth underneath. As an adolescent I had more frequent moments of appearing normal (when I wasn’t sporting a large splint or bandage or hobbling around on crutches), so it seemed like I was in the home-stretch. And then came college and my pre-professional musical pursuits and the ramifications of being “out” with a physical disability took on other connotations.

There were all the internal frustrations of pain and limitation, but at least that was a private struggle. Once I got good enough to start gigging with some frequency, though, it all became more complicated. I vividly remember the first time I was essentially fired for being physically fragile. I was invited to play in someone’s trio, and at one point I had to bail on a rehearsal because of an injury (I offered to show up, but I couldn’t play). The bandleader was super nice and mellow about it . . . and a week later I noticed that the band was playing a gig with a different pianist and I never played with them again.

For those to whom the jazz world is foreign, it operates largely on a freelance basis (quite literally the “gig economy”), so there is no basis for legally or even ethically challenging the hiring practices of an “employer” – if I want so-and-so to play trombone, it doesn’t matter why, it could be talent, it could be reliability, it could be that he has a car and I need a ride to the gig, it could be that he smells better than the other person I’m considering, whatever. It’s sort of like a hybrid of a Human Resources department without any oversight and the social maneuverings surrounding who’s going to go to the prom with whom. So being physically high maintenance doesn’t inherently prevent a pianist (or anyone else in a freelance scenario) from getting hired, but it surely doesn’t help, especially if there are equally skilled folks available who are more robust.

This spurred me to walk an unsustainable tightrope, trying to protect my body while trying to maintain the able-bodied ruse to the outside world. Gone were visual cues like knee pads and bruised shins, replaced by more internal signifiers like a sense of pressure to gut through the too-long gig. I played increasingly with a regular band (i.e. one with steady personnel). This had artistic benefits, but also provided that sense of security – I was inexorably tied to the DNA of the group, so if I had my arm in a sling and had to find subs for a month’s worth of gigs, I still wasn’t going to be supplanted. But in another sense I was treading water, knowing that much of what I had been working for so hard all along was playing and networking opportunities that would require a reliably able body. And as the evidence mounted that this body wasn’t entirely able, it felt as though I was watching a slo-mo video of my life’s path going down the toilet.

I particularly remember a trip from CT to NYC 20 years ago. I played a duo gig and then met up with a friend at a jam session at Cleopatra’s Needle . . . where I didn’t play because I calculated that I would injure myself after emptying the tank at the gig. So after crashing on my friend’s couch, we hung out the next day, grabbed a bite, and went to a private jam session, all of which was great. And yet I was aware of how much the playing and the travel and the couch-crashing and the not-cooking-my-own food was taking out of me. This was the kind of thing I needed at that stage to be doing all the time rather than having to spend two weeks recovering. As if to drive the point home, a cab whizzed by and took off my side mirror and along with it the remaining shreds of a) my morale and b) my earnings from the gig. I’ll save the subsequent couple years of artistic tailspin/existential crisis for another time, but it was pretty dark, and when I began telling more of my colleagues about the physical struggles, it felt like I was being set on a barge and pushed out to sea. Some folks were great about it and stuck by me, and some put me in the “no longer relevant” pile, and I couldn’t even feel incredulous because it was an objectively rational assessment of where this circumstance placed me on their “pianists to call” lists.

So I’d LIKE to say that my “coming out” about EDS was an act of courageous self-acceptance, but to a large extent it was an act of submission, an acknowledgment that I was unable to claim normalcy. When I recorded “Patch Kit” in 2002, at age 28, my desire to share music and stories that related to my struggles with EDS and to raise awareness about (along with money for) the condition was entirely sincere. And yet I’m also aware that I felt emboldened to do that in part because I felt I had no remaining illusion to preserve of relevance to the broader jazz scene. Hiring Ron Carter and Ben Riley to accompany me was less an attempt to affirm my legitimacy and more a fulfillment of the desire to experience something like that one last time and document it for posterity.

And yet, that’s when things began to shift. I talked about life with EDS more often and more comfortably. I began wearing the ring splints, which I had vehemently resisted when I was first made aware of them. And I kept not quitting music, which in some folks eyes made me a role model (even if I never played the Village Vanguard). I had braced so hard for the end that I’d run out of impetus to keep bracing and instead embraced things being what they are. And I realized that I was so, so fortunate to have stumbled through all this to the point where I could love myself, wounds and fragile joints and all, and share these experiences in ways that not everyone has the privilege of being able to do. So, for example, when I began wearing a back brace regularly a couple years ago, I made the decision not to try and hide it under my clothes. Are all of my interactions around EDS now positive? Of course not, but the memories of being shunned recede in the face of newer memories, like that of my daughter’s incredulity at the idea that I might take my rings off for her wedding photos.

And so here I am. Out and proud, and you can even stare at my ring splints all you want.

The Trap of Unmet Expectations

The Election, Jazz, and Discourse Across Lines