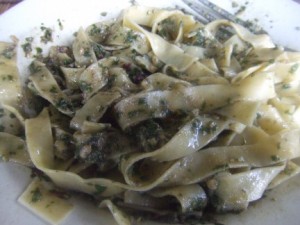 I’ve enjoyed pesto since I first discovered it as a teenager (as I recall) and now that I’m married to a gardener who produces copious amounts of basil, it’s become a staple (albeit a little less so since I started cutting down on pasta last year, though it’s still great in many other settings too). For over 10 years now a late-September ritual has been making a huge trough of pesto with the remaining basil (before the cold weather kills it), which then goes in ice cube trays to be defrosted one serving at a time throughout the ensuing year.

The recipe below represents an approximation of what we typically do (tested for legitimacy, though in practice we “eyeball it”). It’s interesting to note, however, that there is a lot of variation possible with not only amounts (you’ll learn how you like it best) but also actual ingredients. My last pesto, for example, was half-basil, half-cilantro. Many nuts work well (which is good, as the traditional pine nut currently costs about $50,000 per pound) and there are satisfying variations (discussed below) for people who have allergies and sensitivities.

PESTO (enough for 1 pound of pasta):

1) Get pasta water going (throwing in pasta when ready). If the nuts are still raw, put in a skillet over low heat for about 5 minutes (until fragrant and slightly browned), shaking or stirring frequently.

2) In a food processor, combine the nuts and garlic and process until it looks gravelly.

3) Add the basil and continue to process, adding the oil gradually to make a coarse paste.

5) Optional: add a Tbsp or 2 of the pasta water to the pesto before coating pasta to thin it out and make it spread better (I like to do this, Kate doesn’t, it’s cool either way).

6) Coat the pound of pasta and serve with additional cheese as a garnish (a few toasted pine nuts also make a good garnish). Or coat some pasta and store the rest (in the fridge for up to a week or in the freezer for up to a year). Or store it all and use it in salad dressings, omlettes, soups or whatever else.

* Nut-free pesto: instead, add the same amount of sun-dried tomatoes. Note that this is a great addition to “regular” pesto as well, added along with the nuts and garlic

* Vegan pesto: instead of the parmesean, add ¼ cup miso

* multi-herb pesto: substitute other flavorful herbs (suggested: oregano, cilantro, parsley; in smaller amounts, rosemary, sage, thyme, chive) for some or all of the basil

* multi-nut pesto: substitute other nuts or seeds for some or all of the walnuts (suggested: almond, hazelnut, pecan, sunflower seed; use pine nuts if you can afford it)