Adoption Day and the Meaning of Love

Interpretation 1: Today, in a short civil ceremony at the Probate Court, my wife Kate and I went through the legal process of adopting our daughter, Rebecca. Really it’s just a formality among consenting adults – after all, she’s 23 and we have been family for years anyway. Fortunately it was more efficient than a trip to the DMV and we were able to get out of there before the parking garage charged us for staying more than an hour.

Interpretation 2: I love my daughter with all my heart, I pull for her from the edge of my seat during challenging moments, celebrate triumphs that few others would notice and still marvel at how the universe could be benevolent enough to bring her into my life. This is no truer today than it was yesterday, but yesterday the legal relationship did not correspond with the emotional one. Now it does – now there is no question as to who would be authorized to make decisions on her behalf in an emergency, who will be grandparents to her kids, or whether we have any kids of “our own.” Today we got to declare this in public and have it affirmed by the judge and consecrated with a signature and the banging of a gavel (he let Rebecca bang it) in a room of witnesses all moved by what we were sharing in that moment. Wow. 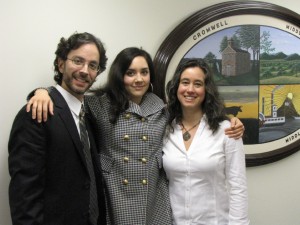 My ability to tie all of these complex emotions together into a set of clear-cut bullet points is made extra-complicated by the fact that my personality is split pretty well between the pragmatic side and the emotional side. I spend a lot of time in the mode of rational problem-solving, even if the “problems” and their eventual solutions are emotional in nature (e.g. my heart says it needs something, and my brain chimes in to figure out how to provide it). I seek order and rational understanding and internal consistency . . . and then I cry while watching sentimental movies, even ones where my rational mind points out that the plot is stupid and the characters aren’t credible. I spend most of my musical practice time doing extremely mundane exercises (technique, harmony, line-building), but quickly become angry and/or bored if I hear a musician deploying these tools in a manner that is not in service of strong and in-the-moment emotional substance.

When it comes to the meaning of love, these contradictions exist in full force, in large part due to my having read Erich Fromm’s The Art of Loving at a key juncture in my philosophical development in my early 20s. I haven’t re-read it since then (so I acknowledge that some of the nuances may have drifted by the wayside in my memory) but the essence I took away from it is that love is a skill and a set of behaviors more than it is a feeling. The goopy, romantic feelings typically associated with love are nice, but they are not in and of themselves love. Instead, love is behaving loyally, faithfully, supportively, kindly and so on towards your beloved. Fromm even goes as far as to observe that arranged marriages are often quite functional insofar as all parties are genuinely committed to the relationship and thus to following a code of conduct within the relationship; in these cases the romantic feelings may come later or they may not, but ultimately that will not be the deciding factor in the success of the relationship.

At the time this resonated with me pretty strongly for a couple reasons. It made intuitive sense that love and affection, while both important, are not synonymous. Somebody can genuinely feel loving feelings toward me, but of what use is that if I can’t count on that person to be there in my time of need? At the time I concluded that the “gut feeling” part of love was nice but ultimately of limited relevance. This reinforced a long-standing, learned skepticism towards love-based ceremony. Mother’s day? Bah humbug, just a crass way for the greeting card and flower industries to make money. Expressing affection and appreciation? Nice enough, but geez, shouldn’t the person already know you feel that way? I still remember arguing with a complete stranger at a party that went something like this:

Stranger: It’s such a shame that it’s raining!
Me: Why?
Stranger: Because there’s a big wedding in town. It’ll be ruined!
Me: Nothing will be ruined – what matters is the quality of the marriage, not the weather at the wedding.
Stranger: (incredulously) I bet your wife would not share that opinion!
Me: (calmly but self-righteously) Actually, she would.

On one level I was right, but I was obviously missing something as well. Again, all of this did not indicate the absence of emotions or even being out of touch with them – rather, I had determined that emotions were important, but it was the job of the rational mind to protect them and their interests, so to speak. As clinical as all of this may sound, I felt that many folks could stand to learn from this, to realize that talking the talk of love for someone should correspond with walking the walk of acting in the best interests of the beloved one. And why couldn’t it be commonly agreed that the true litmus test for a successful relationship of any kind is how people treat each other under adversity and not during the fun photo-op moments.

I still believe that stuff, but there’s another side to the coin as well, as the universe began to reveal on that fateful day in the summer of 2004. Many readers already know this story (some even watched it go down in real time), but the Reader’s Digest version is that Rebecca (then 16) was a student in Kate’s drawing class at the Center for Creative Youth. Less than a week before the end of the program, Kate discovered that Rebecca was looking for a place to go when the program ended. Kate warm-heartedly and impulsively invited Rebecca to stay with us, and then came home and told me she had done so. That was Monday, and Saturday I met Rebecca as we picked her and her worldly possessions up to move in. As I figured it, we were providing a crash-pad for a teenager lacking other viable options, and I could handle that – we had done it before, even. I would behave in a nurturing and supportive manner and we would help her get through the next year and into college and a good deed would be done and that would be that.

My recollection is that it took less than 2 weeks before I realized that this was not turning out to be a crash-pad arrangement after all and, more surprisingly, that I was quickly becoming attached. Yikes! This did not undermine (nor has it at any point since) my commitment to engaging in Fromm-esque practices of love. As I quickly and unexpectedly found myself adapting to parenthood, I did what every devoted parent does, in the sense that I tried to be a good caregiver, role model, mentor, and so on (and I screwed up a lot but did the best I could). Would I have been able to do this without the emotional connection? Probably so, if I were committed to the task. But I guess the point is moot, because that’s not how it happened. Good intentions quickly became love and attachment and thoughts often consumed with ruminations on how to be a better parent.

Given how much teaching I do, the idea of committing to helping facilitate the growth of a young person was hardly foreign and I figured this would be a more focused version of the same thing – and if it had turned out that way, I still think the whole experience had the potential to be very positive for all involved. But Goddammit, this girl needed people to take her into their hearts as kin, as though the stork made a mistake the first time around. Yes, all humans are all interconnected, but it is also human nature to take a special interest in those to whom we are especially connected. Sometimes it’s our children, sometimes it’s our lover, sometimes it’s the shortstop of our favorite baseball team, but even if we want the best for all of humanity, we all know how it feels to have a vested interest in someone who is particularly special to us.

How do I explain what happened to make this happen with Rebecca? I really don’t know – this is where my rational side fails me, and I think that’s okay in this case. I could (but in this forum will choose not to) go on ad nauseum about the rational/Fromm-esque end of things, all the circumstances through which Kate and I remained by her side over the last six-plus years and expect to for the rest of our lives. But on an emotional level? She’s just my daughter, and I don’t have any greater capacity to scrutinize the attachment than any of you with babies do. I celebrate her achievements (of which there are many – she’s a remarkably inspiring young woman) and I marvel at her tenacity, courage, insight, compassion, and myriad other gifts. When she sings or plays the guitar or paints or laughs, it makes my heart go pitter-patter. Like any intertwined humans, we annoy the crap out of each other sometimes, yet that doesn’t matter in the grand scheme. I will be her father forever, and if tomorrow she walked out the door forever, I would obviously be sad and hurt, but it would not change my sense of authentic parenthood.

So which is more important – loving behavior or the feelings in the heart? I wish I were wise enough to give a handy and authoritative answer to that – people have been saying for years that I should write a book about our diverse parenting experiences (in case you’re wondering, Tiana was there for the hearing and Ariana came for the reception afterward), but my answer is that I’ll do that when I feel like I actually know something! This I do know, however: if both versions of love are in place, you’ve got a pretty damn good shot at making something special happen. And today is a beautiful day to celebrate just how special it has been for our family.

Millet Brick and Pursuit of the Best Self

Stop the Bleeding: What Disability Has Taught Me About Treating the Symptom (Societally, Physically, or Otherwise)