I love pasta (ideally whole grain), bread (ditto) and rice (ideally brown) as much as the next guy. But for variety of both taste and nutrition, I like to diversify which grains are in my diet. There are many that I enjoy (I’m hard pressed to think of any I don’t) but I’ve also learned that in some cases the preparation makes a huge difference in the taste and texture. That may seem obvious, but when you make pasta you don’t need to be that precise about the amount of water you cook it in, and if you overcook it a little it won’t burn and will still be recognizable as pasta. With many other grains a couple minutes and a bit of water here and there is the difference between porridge and a well-defined grain – both are legit, but it’s pretty disappointing if you inadvertently find yourself putting your stir-fry onto a pile of glop, however tasty the glop may be. 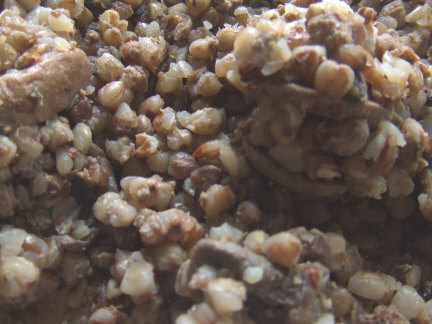 I grew up eating kasha (a.k.a. buckwheat groats) periodically, but I never became that fond of it until as an adult I learned this method of cooking it. A couple variations listed at the end make this into a possible centerpiece of a meal (and if you use all of them, you essentially wind up with the traditional Jewish dish kasha varnishkes). But in its simplest form it’s a tasty but mild, versatile cooked grain that’s also very high in protein.

NOTE: this recipe can easily be doubled if you’re cooking for a crowd or want leftovers (cooked kasha in this preparation stores well for up to a week in the fridge).

1) Turn a durable skillet up to medium-high heat with the oil or butter. Heat up the stock (in another pot) or water (I cheat and heat up water in a kettle and use powdered stock, which I sprinkle on the kasha when I add it to the skillet).
2) When the oil is hot (or butter is melted), add the raw kasha and the egg and stir vigorously for about 3 minutes. The egg should mix into the kernels thoroughly and the grains should be relatively dry and well-separated but not burned.
3) Add the hot fluid gradually (stand back so you don’t get splattered) and stir together, adding the salt and pepper at this point.
4) Cover with a tight lid and reduce the heat to low.
5) After 10 minutes, check – it may need another 5 minutes or so. If the fluid hasn’t fully been absorbed, give it a few more minutes. In the unlikely scenario that the fluid has been absorbed (or is about to be) but the grains don’t seem cooked, add a little more water.

Variations: sauté chopped onion (1 small one for this amount) and/or up to 1 cup sliced mushrooms before adding the kasha to the skillet. For the kasha varnishkes effect, you can also cook a 1/2 pound of cooked bow-tie noodles (or other stumpy, ideally egg noodles), toss in a Tbsp of butter and mix with the kasha once it’s cooked.