Basic Garlicky Kale (and other greens) 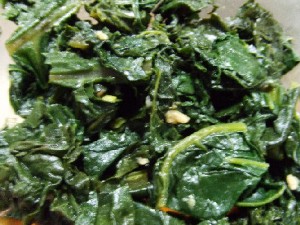 I love kale and other leafy greens, and for reasons I’ll explain in a little bit, this is something of a miracle. Our stock recipe for cooking kale and collards is an altered version of a technique we learned from Chef Mark Shadle at It’s Only Natural (ION) Restaurant, where I used to play (and thus eat) a couple times a month during the Trio’s infancy stage. With a little flexibility, this basic technique can be applied to a number of green things (broccoli, beet greens, spinach, chard, Brussels sprouts, asparagus, escarole, etc.), which is great because a) it tastes really good and b) contains 4 ingredients (5 if you count water, I guess) and is generally really simple. I’ll provide a recipe of sorts (I never actually measure) so you can have quick success, and then I encourage you to work with the technique if you like the greens in this way. Feel free to skip forward to that if uninterested in the backstory.

The green glurge. Yes, it tasted just as it sounds. My 2nd grade year (1981-1982) represented a transitional period medically, where the symptoms of Ehlers-Danlos Syndrome had reached the point that it was clear something  was wrong with me, but an accurate diagnosis was still a ways down the road. That year a (presumably well-intentioned) doctor surmised that the problem was a Vitamin K deficiency and that the solution was massive amounts of meat (which up until then I wouldn’t eat, realizing now that I knew then on an intuitive level how ill-suited my stomach was to the task of digesting meat) and leafy greens. After a handful of, um, creative attempts to combine these elements with things I did enjoy eating (most vivid memory: a bowl of canned peach slices mixed with ground beef), the convenient solution of green glurge was decided upon. Thus for about a year, my daily ritual included a good-sized afternoon bowl of pureed meat (I only learned years later that there was meat in there, actually) and raw, unseasoned leafy greens. I would dutifully choke it down because I was a good kid and because I was being told that this was the solution to my rash of injuries. (If you’re wondering “why didn’t they just give you Vitamin K pills,” well, let’s just call that another conversation.)

With my EDS diagnosis came the end of the glurge, but not the end of the intense gag reflex that accompanied the smell of raw kale or collards being chopped. In 2001, as I was knee-deep in the “adult phase” of EDS-based challenges, a naturopath explained to me why it was important for someone with my collagen issues to eat collards and kale. Ever-dutiful, I tried to figure out what to do with this culinary death sentence. Only at that point did I realize that I was already very much enjoying collards at ION, having been ignorant of that because they were referred to somewhat vaguely on the menu as “garlic greens,” which I now see referred to their preparation and not their botanical origin. Courtesy of their cookbook, I saw that pre-blanching the greens (chucking them in boiling water for a few minutes) was a missing link. We have subsequently gone on to find various other ways we like using kale and collards (in soup, stewed with tomatoes, the ubiquitous-in-our-home kale chips), and our techniques have changed subtly since first following Chef Mark’s recipe. That said, the basic technique (blanching and then cooking with garlic and tamari [high-quality Japanese soy sauce]) remains our go-to means of preparing greens, and the leftovers remain good (heated, cold, room temperature, whatever) for up to a week. I’ve been eating kale daily this week and still can’t get enough, which is kind of remarkable considering their place in my history (I still have some level of gag reflex when I chop the greens raw, but I know it’ll be worth it).

1)      While the water heats up, wash the greens carefully and then chop them. If the leaves are uniformly tender, just chop ‘em up. If the spines are substantial, then slice the leafy part away from either side of the stem and then chop up the leaves and discard the stems.

2)      When the water boils, submerge the chopped greens in it and leave for about 5 minutes (less if the greens are particularly tender, which they won’t be if you got them at the supermarket).

3)      Drain the greens and rinse them in cold water until you no longer see any steam rising from the colander. Take a moment to marvel at how small the now-blanched pile of greens is compared to the heap of stuff with which you began.

4)      Return the now-empty pot to the stove over medium-high heat and add the oil. After about 30 seconds, add the garlic and stir for 30-60 seconds, until you can smell the garlic cooking but it’s not yet brown.

5)      Add the tamari and continue to stir until you see the tamari start to bubble and thicken through the evaporation of fluid. At that point add the greens and stir vigorously so that the stuff in the pan coats the greens thoroughly. Cook/stir for another 2-3 minutes and then eat it up!

The technique applies to the other greens listed above with the proviso that how long you blanch depends on the heartiness of the green thing in question, as well as how mushy/crunchy you like it. Spinach, for example, is very delicate and probably only warrants a minute of steaming instead of blanching. Likewise, if you don’t like soggy asparagus or broccoli (I don’t), then blanch until ever-so-slightly tender and then quickly get some cold water on it. Likewise, the amounts of garlic and tamari can be adjusted in either direction depending on how garlicky and/or salty you like things. Feel free to add pepper or lemon juice if you feel the need for a little extra “zing” (I generally don’t).

baked falafel and the veggieburger conundrum

Tomato Sauce – Basic and with Variations