Farewell to Tennis and Lessons Learned

It’s now been a year and 17 days since my last ever time hitting a tennis ball. Not that I’m keeping track. I miss it tremendously, but I was also determined when I began my “comeback” in earnest to have a different experience when I eventually hung up the racquet than I did the first time that happened. And indeed, the overarching sense is one of gratitude. Gratitude not only for the great experiences, but for what being on the tennis court has taught me about life outside the lines.

Given the improvisational spirit of tennis, it’s not surprising that I was drawn to it just as I was drawn to jazz music. In both cases there was some divine intervention as well. In the case of jazz it was in large part meeting the right peers and mentors at the right time and being exposed to inspiring music at formative junctures in my development. In the case of tennis, my struggles with the connective tissue disorder Ehlers-Danlos Syndrome (EDS) led to the somewhat naïve sense that athletics would be fine for me as long as I avoided contact sports. I had zero interest in golf, bowling or competitive swimming but fell in love with tennis rather quickly.

My love affair with tennis never waned, but my life as a player was gradually back-burnered starting at age 17 when my pursuit of a career as a musician began to dominate my schedule. At one point I had enough money to either sign up for the next round of tennis lessons or replace an important piece of keyboard gear and that sealed the deal in a sense. I kept playing, but that petered out in my twenties in the face of EDS and the awareness that it was going to be hard enough to keep my body functional enough to keep playing music without giving it a further pounding on the tennis court. I gave my racquets to an elementary school PE program and even wrote a song called “Bye Bye Backhand” for the 2002 sessions for my Patch Kit album.

And then, some years later, I picked it back up again. The “comeback” is documented here and here

I knew when I picked it up again that a) I was playing with house money and really needed to savor every moment and b) when, inevitably, it was time to pack it in, it was important that I be able to translate it. The most important part of that was the joy. It pains me to confess this, but for reasons I still don’t entirely understand, playing tennis gave me a joy that is difficult to access even with music. Partly the endorphins, I suppose, partly the thrill of competition, partly the different expectations (there’s no career pressure, for example) and partly who knows what else. But what I hoped more than anything was to learn how to access that joy at other times.

And I did, which is in and of itself all I need to feel grateful about. But I got a lot more, and that’s part of why I was able to walk away. When I walked (limped, really) off the court on 10/12/14 I didn’t know yet that would be it, but when I saw the writing on the wall (or, I suppose, the MRI of my back) it was from a place of surprising peace that I decided that was it. I got so much out of it that in my “first life” as a tennis player I didn’t yet have the maturity to absorb.

In recent weeks I have been contemplating some of the primary lessons I learned, which I’ll share here.

Such a tired sports cliché, but so important to me. Perseverance through challenges is one of tahe traits I value the most, but usually that’s a pretty unglamourous and subtle thing. But at 3-3 in a sweaty, exhausted third set, the notion of digging deep takes on a visceral form of immediacy. Especially given my physical challenges it was huge for me to have that experience of pushing. It is ultimately the biggest reason I walked away (that drive to push is at odds with my need to meticulously control what I do with my body), but I can feel how all of my times pushing myself through a wall on court reminded me potently what that means in the bigger picture.

I was what one would call a “streaky” player, sometimes walking on air and sometimes plodding along with leaden shoes and a string-less racquet. Because of this, and because tennis depends so much on composure, it was vital for me to learn how to take a deep breath (or three) and play the next point with a clean slate. Many of my most satisfying moments on court came when, regardless of outcome, I was able to reboot and abort a slide.

Plan ahead and be patient.

Invest deeply in the preparation, disinvest from the outcome.

This is a core philosophy of mine, and tennis helped to strengthen it. All we can control is our side of the court and not what happens outside (whether the other people involved or other circumstances beyond our control). Because my objective was personal growth and not trophy-accumulation it was important for me not to get caught up in the results. While obviously I tried to win each time on court, I learned to appreciate the well-fought loss more than the sloppy or lazy victory. In the end, I learned to win or lose and move on

Tennis is, of course, an “it ain’t over ‘til it’s over” game. You could be down 6-0, 5-0 and still have an abstract chance of winning. I never had a problem fighting until the last point, but the other side was a chronic weakness. That is, if I was winning comfortably, I would take my foot off the throttle and often before I knew it I had a fight (and sometimes, ultimately, a loss) on my hands. Staying ruthless until the end, while not natural for my personality (I’m not a particularly ruthless guy), was an important skill to acquire.

Goals are helpful, but are not necessarily to be taken literally

This was a good chance to test out my Sisyphus-inspired core philosophy of ambition and persistence, as I discuss here.

The tennis code of ethics dictates good sportsmanship, including the edict that if you aren’t SURE about a call, you shouldn’t make said call in your own favor. Toward the end of my time on court, I had a moment in a tournament that forced me to put that to the test. It was a pivotal moment in a long, exhausting match and I’m pretty sure my opponent hit the ball out . . . but in the moment I wasn’t sure enough (I was watching my feet more than the ball as I scrambled in vain to get to it), so I called it in, lost the point (and the game, and the match). It wasn’t without some ambivalence, but in the end the only meaningful thing I would have to show for the match, win or lose, was a sense of pride. Having a victory built on shaky ground wouldn’t serve that, so there was no practical reason to go that way, never mind the ethics. This is a principle that applies to so much of life.

Most of us don’t get the storybook ending, and that’s okay.

I played three tournaments last year. In the first, I lost my first match 6-0, 6-1 to a high school kid and then waited around for 5 hours for a consolation-round match that never happened. The next one I fought hard for the better part of 3 hours against an intimidating opponent and lost 7-5 in the third set. Finally I played a match in which my body felt terrible, but without the usual fleeting moments of adrenaline-fueled light-footedness. I was down a break in the third set and I DUG DEEP and FOUGHT and brought it to 4-4 and then had two break points. On one I constructed the point perfectly and then dumped an easy forehand volley into the net and on the next I hit a perfect point-ending shot and got a bad call. I don’t think five minutes passed from then until the deflated handshake and my retreat to the showers. I played twice more after that, on the last occasion pushing (probably foolishly) through sciatica that ultimately hobbled me for months thereafter.

I’m not going to lie, I STILL can taste that forehand volley. But I’m not aware of any athlete (or, really, human) whose last moment is the picture perfect one. And if it is, there are probably still pangs, they’re just pangs of wondering whether there could have been more. This is part of the human condition and life gets a whole lot easier when we recognize that.

Thanks tennis – I’ll keep admiring you as a spectator and will always cherish what you gave me as a participant. 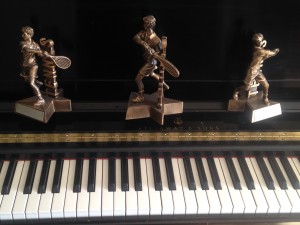 When “Thank You” Trumps “I’m Sorry”

MLK Day and the Cat in the Rain