Yesterday was my wife Kate’s birthday. Perhaps I’ll blog sometime (anniversary, maybe?) about her (summary: she’s amazing. I love her), but this entry is about my task of coming up with a special meal for the celebration. I made a fresh pesto (with garlic chives from the garden, almonds, basil, olives, extra virgin olive oil and romano cheese) to go over some fancy (though store-bought) egg noodles.

To go with that I came up with a vegetable dish that I don’t have a name for – broiled asparagus, peppers and mushrooms with garlic, scallions, tempeh (baked and then seasoned/marinated in tamari, balsamic vinegar and a little honey) and grape tomatoes.

The dessert, however, is what took the bulk of the time and creative energy. Kate had expressed an interest in something with chocolate ganache (thanks Mark Bittman), but I also know that she’s a bigger fan of fruit desserts (ideally fresh/seasonal ones) than of cake. So after determining that the rhubarb in the garden was looking good, I came up with this. The “surprise” is that with the thick layer of chocolate, you can’t actually see the fruit layer until you cut into it.

To go with this I made a homemade French (e.g. custardy) vanilla ice cream with organic vanilla bean. This was partly to complement the tart (which it did quite nicely, thank you very much) and partly as a pre-emptive move to avoid excluding our daughter, who I suspected (correctly) would be suspicious of rhubarb and who isn’t a fan of dark chocolate.

Notes: the egg whites help bind together the cooked fruit, but I also happened to have them because I needed the yolks for the ice cream, so they could have been left out without a huge impact; the chocolate ganache could have been cut in half or even a third and drizzled over the top and the effect would have been equally good, just different and less of a surprise – in this quantity, the chocolate layer is thick and intense.

2) For crust, mix together dry ingredients (everything but butter) and then mix in butter until combined. Press into a 9”x13” pan (I didn’t grease it, though it wouldn’t hurt to do so, particularly given that I experienced a little sticking). 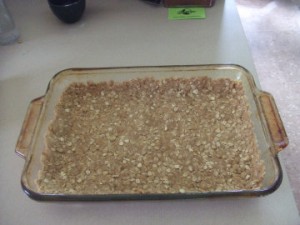 3) Bake crust for 10 minutes (assembling/chopping fruit during this time if you haven’t done so yet).

4) Mix together strawberries, rhubarb and maple syrup and spoon/pour/dump this mixture onto crust. If using egg whites, pour on top of everything as evenly as possible.

6) While baking, you can make the ganache – put the chocolate into a decent-sized bowl. Heat up the cream on the stovetop until it is hot – steaming, though not yet boiling. Pour into the bowl with the chocolate and whisk together until blended.

7) When tart is done baking, pour chocolate over the top.

8 ) Let cool (which allows fruit flavors to come out and allows chocolate to harden) before serving if you can.