This weekend I played my first tennis tournament since 1989. It was in a sense no big deal – I played in a division that both represented the lowest skill level offered and was so under-enrolled that, win or lose, I would only play one match – so, in that sense, hardly worthy of acknowledgment, much less celebration. However, as a milestone moment in a longer journey, this was an intense and symbolically loaded experience.

My relationship with tennis began in 1984 when a visiting cousin tuned in the TV to a match at Wimbledon between Ivan Lendl and Jimmy Connors. I was quickly won over and before long I began taking lessons and playing whenever I could. My game was virtually flawless, with a few subtle exceptions such as the fact that I wasn’t fast or strong or otherwise athletic, my strokes (in spite of quality instruction) weren’t particularly reliable, my mind typically got in the way, and whenever I managed to use strategy, it was questionable. What I did have going for me was passion and stubbornness, my nickname of “Bump” (as in “on a log”) notwithstanding.

I played in a few tournaments as a teenager and managed to do surprisingly well considering how much more athletic my opponents tended to be. I loved to play sports (making me the odd man out in my family) and upon being diagnosed with Ehlers-Danlos Syndrome in 3rd grade, soccer, football, basketball, baseball, hockey and all other potential “contact sports” were off-limits. With all due respect to golf and bowling and other less dangerous sports, tennis for me was the perfect fit of being athletic and competitive, yet safe. Of course at that point I knew virtually nothing about the long-term chronic joint issues that EDS would bring, and to this day I’m sheepishly glad for the blissful ignorance that emboldened me to keep playing tennis, indeed to view it as a safe alternative to other things.

Then in 9th grade, the moment I was waiting for came, tryouts for the varsity team at school. Some of the older players kicked my butt, but I acquitted myself well enough to earn a spot . . . but I also was becoming increasingly affected by a hernia. So I stepped aside, rehabbed from the surgery and got back to it. Spring of sophomore year came around and I managed to dislocate my knee rescuing a baby from a burning building. Or at least that was my caustic explanation to the physical therapist (score one for deadpan humor). Rumor has it that, in fact, I simply lunged for a balloon in a game of quasi-volleyball at a party and my knee didn’t cooperate. In any case, 2 months in an immobilizer, more rehab, another missed season. By the following year I was in two bands and spending afternoons at an arts high school, so it would have been a huge stretch logistically, even though I was still playing varsity-level tennis, and therefore I essentially put down the racket. I had been raised to view athletics as a distraction from more important things, after all.

I have very few regrets in life (indeed, you could say I’m philosophically opposed to regretting anything based on a decision made with integrity) but the unfinished business of walking away from the game while my body was still able remained emotionally unresolved for years. As I became more consumed with music and my joint problems made playing tennis an increasingly challenging activity to pull off, it felt like I barely had enough in the tank for the piano without taxing my wrists any further. I made a few attempts to come back, but as the rest of my joints went downhill I saw the writing on the wall. Around 2001 I decided it was time to pack it in for good, donating my racket to a school physical education program so it wouldn’t taunt me when I went in the closet. Nobody flat-out told me I needed to quit, but it seemed the only sane thing to do. At least I tried to maintain a sense of humor about it, as with writing the tune “Bye Bye Backhand,” which I recorded as the opening track on Patch Kit.

Then in 2008 a funny thing happened – I started playing again, sort of. That summer capped off perhaps the roughest year of my adult life and I was just looking for something to release some stress. I played a bit with Kate and it seemed harmless enough – she didn’t hit that hard and I was hyper-aware of possible injury. The following year I was invited to be one of the musicians for a performance art piece staged by my great friend, the brilliant multi-disciplinary artist Michael Pestel. Called “Tennischerzo,” it involved musicians playing in response to a mixed doubles match on Michael’s DIY grass court (anthills and all). One of the female players didn’t make it, so I borrowed a skirt and a racket and changed roles and didn’t completely embarrass OR hurt myself.

In 2010 I really decided to go for it, buoyed by my youngest daughter Tiana deciding to try out (successfully, as it happened) for the Middletown High tennis team. I played often on the green grass of Pesteldon and on hard courts with the painter David Schulz, who was extremely patient as my skills slowly returned. I also played some with and received priceless coaching from Shona Kerr, whose primary claim to fame is as a squash player but who can nonetheless smack the sh** out of a tennis ball in addition to being an insightful and patient educator (not to mention humble enough that she’s probably cringing to read such compliments).

Fast-forward a couple years, a couple pairs of increasingly expensive shoes and (knock wood) no major injuries occurring on-court (snow-shoveling, that’s another story) and I decided I wanted to enter a tournament. It’s one thing to play with my friends and stop whenever my body gets worn out, with nothing “at stake,” another thing when it “counts.” In most ways that doesn’t really matter, but I still had that unfinished business, more than 20 years marinating by this point, not to mention the persistent questions of whether I could hang in there and do it “for real.” Yes, I suppose I became a bit too enamored of the narratives behind the sports movies I watched as a kid, but dammit, I wanted to seal the comeback.

So last week I pulled the trigger, with the full support of my family. My daughter Rebecca even told me that I’d be a winner in her eyes even if I lost (which, however cheesy, still felt pretty nice, I must say). Coach Kerr agreed to enter on the women’s side (in two categories, not dropping a set in either) and serve as coach, and yesterday (after a day’s rain delay) came the moment of truth in, of all places, Waterbury, CT.

My opponent, Joe, was a really nice guy, reinforcing Shona’s admonition that you don’t have to manufacture dislike for your opponent to compete ruthlessly. However, fresh legs and solid strokes are pretty helpful, and although I started strongly, midway through the 2nd set I lost both in rapid succession, realizing a bit too late that I had perhaps trained a bit overzealously. And I was playing an opponent whose style kept me running and running without being able to establish a rhythm. I won’t bore you with the minutiae, but it was neck and neck and I was increasingly forced to rely on guts as everything else seemed to drift by the wayside.

After 2 hours, when the match reached 6-3, 2-6, 5-5 (or, for those unfamiliar with tennis scoring, dead even and almost over) it would have been a good time to reflect on perseverance and overcoming and the support of my loved ones and the challenges of being a disabled person in the world of the able-bodied. That is, it would’ve been a good time for someone ELSE to reflect on these things, because I still had to stay focused and drag myself through the end of the match. That said, there were two thoughts (aside from “focus” and “keep scrapping”) that I just couldn’t shake.

1) I was just immensely grateful to even be there. Competing and even completing a match in a tournament was the real victory.

2) Nonetheless, I wanted that f***ing trophy! Not for playing one match in Waterbury, but for everything that led up to it. Call me shallow, point out the misplaced emotions, do as you like, but I only ever won one trophy as a kid (in 1987, if you’re wondering, and the trophy broke a long time ago) and I figured I was about due for another.

And so it went, for two more games. I dug a little deeper and sweated a little more and kept as much composure as I could with 4 hours sleep and a spent body. Will I do it again? I don’t know, give me a little while for my body to recover before I have to decide. But I achieved something I can feel proud of just by walking onto the court that one time . . . and I got my trophy too. Ain’t it purty? 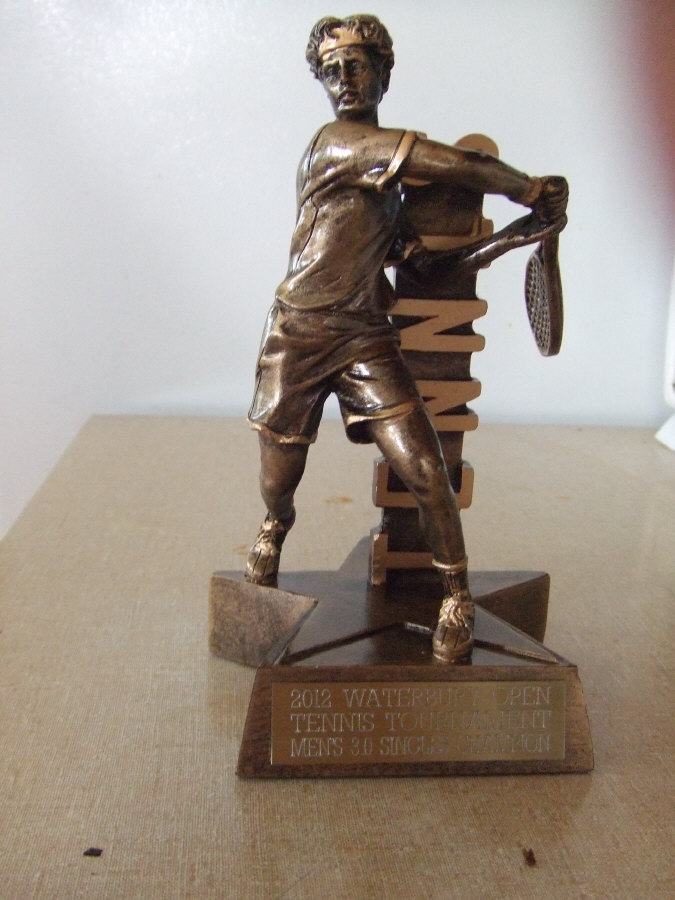 When “Thank You” Trumps “I’m Sorry”

Whose Burden Should This Be?

Every Day I Push: Sisyphus as Role Model