baked falafel and the veggieburger conundrum

I’ll start by cutting to the chase – I’ve figured out how to make good falafel without frying it (!) and I think I figured out how to translate the concept into making veggie burgers that avoid most of the usual pitfalls (!!) – more on both below.

Like many artsy teens growing up in and around New Haven, CT, I spent a lot of late evenings hanging with friends and eating falafel at Mamoun’s Falafel Palace (which some of you would know from its auxiliary location in Greenwich Village). At the time I had no idea what was in it, but it was sure tasty!

I now know what it is – a generally deep-fried patty/fritter make from chickpeas, sometimes in combination with fava beans (note – I’ve tried cooking it with favas, and it’s tasty but labor-intensive because you have to pull the skins off the favas after soaking them). Typically falafel is served on a pita with vegetables (lettuce, tomato) and drizzled with tahini sauce (basically tahini, lemon juice, salt), or else on a plate with tahini sauce for drizzling or dipping. Aside from the not-insignificant issue of deep-frying (note that the batter below can be formed into balls and fried if you are so inclined), it’s healthy stuff in addition to being tasty.

My profoundly disastrous first attempt at falafel-making led me to the realization that the batter is not made from cooked chickpeas. Rather, dried chickpeas (easy enough to find at a health food store, Indian grocery, or in the goya section at the supermarket) are soaked and then ground up with spices and such to form the patties. Once I got the hang of it, I recently tried to circumvent the frying part by baking them; that worked out well as long as the baking occurred at a low enough temperature to cook the patty without burning the outside. The next step was to spread the batter out on a pan and do the cutting after baking. The benefits here are that a) it’s less messy and b) the falafel can then be cut to whatever shape and dimensions you like (custom-sized to your sandwich bread, for example, or cut small to be put on a salad). The non-fried falafel is a little dry, but generally it would be served with “hydrating” vegetables and condiments anyway, so that doesn’t bother me. 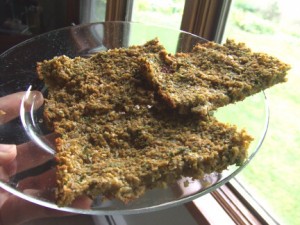 As of now my basic falafel recipe is:

2) assuming you’re baking the falafel, preheat oven to 325 and oil a large (12×17) baking sheet/pan, ideally with sides (as opposed to a cookie sheet)

3) drain the chickpeas and throw all the ingredients in a food processor, blending until pretty smooth but still somewhat gritty (as it were)

4) with a rubber spatula, press the batter evenly into the baking pan.

5) bake for about 30 minutes and cut to desired sizes/shapes (using a spatula to get underneath as you remove).

So at this point I started to wonder (in part inspired by some Mark Bittman suggestions that I haven’t yet tried) if this could solve the “veggieburger conundrum.” The conundrum is how to make a homemade veggie burger (I’m eating a lot fewer storebought/processed foods) that holds its shape decently (most recipes I’ve tried fall apart when you cook them and/or need to be fried like crazy to create a sufficiently hard outer coating to contain the innards) and doesn’t contain tons of breadcrumbs (the usual solution to the structural integrity issues; tasty, but put it on a bun and you’re basically eating a bread sandwich). The baked falafel is tasty, nutritious (high in protein, low in bad stuff), not fatty and doesn’t use any grains. Once I was eating some leftover falafel and had neither tahini nor hummus (if tahini sauce intimidates you, a good store-bought hummus [insofar as that’s not an oxymoron – click here for my recipe] will do in a pinch) so I put it on whole wheat bread with lettuce, avocado and ketchup and I realized that it was essentially serving the same function as a veggie burger.

From that conceptual starting point, the veggie burger/pattie variation I came up with last week . . .

. . . entailed replacing the chickpeas with dried black-eyed peas. I had a bit more (about 2 ½ cups dry) so I increased the non-herb ingredients accordingly (half-again as much as the recipe above) and replaced the herbs with a Tbsp of oregano (I kept the parsley the same). Because there was more batter, it lined the baking pan more thickly, which meant a) thicker patties, b) a 5 minute increase in baking time and c) a moister (but still fully-cooked) center to each patty.

I wouldn’t yet classify this as a full-fledged “technique” (I haven’t experimented enough to presume that this approach can be translated to any legume or seasoning), but I’m optimistic and am looking forward to the next attempt (I’m thinking curried lima beans – we’ll see). After a week of leftover black-eyed pea patties served in various contexts (salad topping, sandwich “substance,” faux meatballs) I’m pretty impressed by how well these held up and I’m struck by what a far cry they are from the commercially-available patties which serve the function of putting something hearty on a bun, but generally are hard to imagine coming from nature (as opposed to a processing plant). Viva la beanburger!

Tomato Sauce – Basic and with Variations