This is one of our standby salad dressings and is also particularly useful drizzled on falafel (click here for my recipe). If you want creamy yet vegan for a dressing, it’s hard to top this. If you’re unfamiliar with tahini (as, tellingly, Microsoft Word clearly is, suggesting “Tahiti” and “thin”), note that a) it’s just ground up sesame seeds, b) it’s a primary ingredient in hummus, and c) it can be easily found in health food stores (alongside peanut butter), middle eastern groceries and often in supermarkets alongside Jewish or middle eastern foods. We are partial to Joyva brand (which is pretty easy to find and very flavorful) but there are many good tahinis out there, both imported and domestically produced.

NOTE: if you crush the garlic, the whole thing can be blended in a bowl with a spoon and/or fork and no food processor is then needed, you just need a couple more minutes and some elbow grease.

NOTE: an additional trick is the use of Umeboshi (Ume) plum vinegar, which can take the place of the tamari. This is the “secret ingredient” (it’s in a cookbook, so not that much of a secret) in the tahini dressing developed by Chef Mark Shadle (now of G-Zen in Branford) for ION Restaurant in Middletown. We don’t usually keep this around, so our recipe doesn’t incorporate it, but it is a nice addition if you’re so inclined. 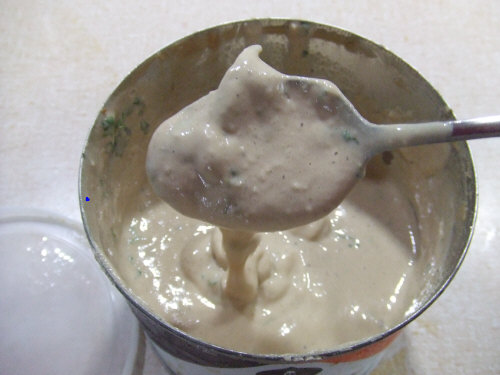 – optional: fresh or dried herbs (1/4 cup finely chopped parsley would be my choice if available)

1 ) Throw garlic in food processor and, if not already crushed, chop up for a few seconds.

2 ) Add the lemon juice and tahini and blend until pasty and well-blended. Periodically scrape down the sides of the processor with a rubber spatula.

3 ) Add the water, tamari, pepper and blend until smooth.

4 ) If using, add herbs at the end and blend just until fully incorporated.

Basic Garlicky Kale (and other greens)