Sage is a tricky herb – it’s tasty, but kind of strong. As such, there are few applications (especially for vegetarians like us who thus don’t use it for ham stuffing or whatever) where you can use copious amounts, as one might turning a large pile of basil into pesto or a large pile of parsley into tabouleh. But at least in our garden the sage plants come on strong, so the question arises of what to do with all that sage? That was my jumping-off point for this experiment, which ultimately turned out quite well, allowing the sage to split the difference between fresh and dried, blending well with the beans without being overpowering. 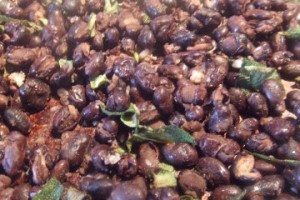 It was also really easy – about 15 minutes start to finish. Serve it with rice or as a protein-rich side dish with salads (cucumber salad is particularly great this time of year if you have access to local cucumbers). The optional tomato (though it maybe adds 2 minutes of chopping to the estimate above) adds flavor and, perhaps more importantly, moisture. Otherwise it winds up being a pretty dry dish – that’s how I made it and it wasn’t problematic because it was being served alongside a moist salad. Also, I imagine that other fresh herbs would work well here, but since the point for me was to find a use for an otherwise vaguely-useful herb I haven’t tried that.

– a little oil for the pan

1) Preheat broiler or set oven to broil. Lightly coat a baking pan (with sides) with oil.

2) drain the beans, chop the sage, throw all the stuff in the pan

3) when the broiler is hot, put the pan in and broil for about 10 minutes, removing to stir once or twice along the way.